Based off of these extremely easy to come by statistics, we can conclude two things.

Let’s break both items down.

This one is easy to understand for the majority of women, until they hit the good ‘ol Wall when things come crashing down.  Post breakup, even if she is a “nice” girl, any decent looking woman has a plethora of options to explore upon entering the realm of being single.  She’s got the boys on Facebook liking her statuses, OKCupid offering her guys left and right, and probably several other co-workers and whatnot who would love nothing more than to validate her worth as a woman by sticking their dick into her warm wet hole.  On top of this, she’s got girlfriends/parents/betas telling her, “What an asshole,” that guy was, and that she, “Has plenty of time to find a nice guy (bullshit).”

Taking account for the fact that men are probably more likely to seek out Google for answers than women – women just don’t have as much reason to.  It’s that simple.  Let’s take this fictional story for example:

Dan and Sarah live together in the same dorm.  It is their freshman year at college.  Sarah is a cheerleader for the school, while Dan, while a cool guy, is a relatively simple guy.  He majors in business finance and plays guitar in his free time.  Sarah majors in Communications and most of her free time, when not performing, is spent out with her cheerleading friends; going to parties, school events, etc.  Dan courts Sarah at the end of freshman year.  They go on a couple dates, have sex, and continue to date for the remainder of the year; and into the summer.  Two years later, junior year, they move into an apartment, together.  Near the end of their lease, they decide, mutually, to break it off.

Both Dan and Sarah head to downtown that night with their respective groups of guys and girls.  Dan’s boys want him to find a new girl to bang, and Sarah’s girlfriends are encouraging her to “find someone cute.” 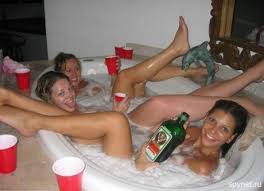 The question readers, is as follows: who will have it more difficult?

If you even thought about answering #1, then you need to actually go out on a few dates, hit a few bars, and reevaluate your position in life.  You’re fucking clueless.  Game or not, a girl is always going to have it easier.  Sarah could walk into a bar and yell, “Who wants to fuck?”, and she’s have a line longer than the ladies restroom of dudes willing to line up and be at her beck and call.  Note, this concept does not apply to fatties.

So it’s very likely a girl would not even turn to the Internet for answers.  She simply cries to her girlfriends, and then goes to the bar to find new dick.

On the flip side, unless Dan has mad game, or gets really lucky, he isn’t going to have as easy as a time picking up a new girl to fuck.  Your average guy probably goes through a dry spell post-breakup.  Most won’t have the ability to go out and seduce a new girl just hours after breaking up.  A guy has to do more than show up at a bar to find some pussy.  He has to be willing to make the approach, jump through the hoops, and handle all the logistics.  Most guys don’t have that ability.  So instead…

They turn to the Internet.  Hey, this was me at one point.  I’ve Google’d for dating advice countless times in my life, until I started to figure it all out.  We, as men, are forced to be more resourceful simply because we don’t have such an easy escape from it.  Sure, it’s the circumstances provided that cause us to be forced into it, but do you really think women would have the ability to create communities such as what you see on RSD, Chateau, PUA forums, etc?  I doubt it.  It’s a survival skill; men are forced to navigate through the tough times.  Men can’t tell the guys how we really feel, because we’d look like too much of pussies.  Men are forced to face our inner demons, seek anonymous help on the Internet, and build large communities that can be a resource for future men with the same problem.  Men are forced to conquer their fear, get back out there, and search for love, sex, and companionship from square zero (unless you’re spinning plates…which you should be).

Men can’t just walk into a bar and spread their legs.

Read More: Respecting a Girl After Sex on the First Date

27 responses to “Men Are More Resourceful Than Women”