Previously in my series of posts about my Europe ’14 trip:

Needless to say, after the debacles of Volume I, I was ready for a drink.  Or 5.  Fortunately, Lucky had already stocked our fridge with cheap Polish vodka – likely the equivalent to Smirnoff here in the states.  Except it was phenomenal for being a $5 bottle of liquor.  It was one of the smoother vodkas I had ever had.  Poland knows how to do that shit right.

Amazingly enough, I woke up hangover-free the next day.  After picking up some polish sausage and spam (pic below, it was actually delicious), it was time to get my first look at Wroclaw during daylight hours.

We wandered all over town, making our way to Wroclaw University.  We also checked out the Bridge of Love, where I bent Lucky over and raped him in the ass.  Okay, that didn’t really happen, but after the events of the previous night, in which I think I earned a “wingman of the year” award, I was armed and ready to harass him all day for not making a move on the balcony brunette.

Wroclaw is a gorgeous city, with a lot of quirks to it.  Rather than ramble on about the sights we saw, I’ll let the pictures speak for themselves.

The halls of Wroclaw University.

The Bridge of Love

No, we didn’t write our names on a locket…

Shortly after that we stumbled across St. John the Baptist’s Cathedral, where they let us walk up about a million flights of stairs – to the most ghetto elevator I’ve been on in my life – which then took us to the top with panoramic views of the city. 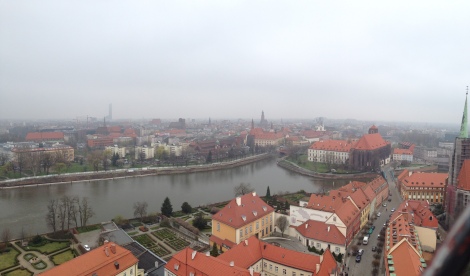 After this, we proceeded to get lost as fuck.  I’m sure we wandered around in circles for at least three or more miles.  The funniest part of this was when Lucky asked this old guy for directions, who completely blew him off.  And that might be the nice way of putting in.  Five minutes later, I opened a genuine beauty whom was more than happy to give us directions, and she even went as far as finding a map trying to help us find our way.

Daygaming in a foreign country is really as easy as being lost.

Eventually, we found our way home and took a nap.

Then the night of shenanigans began with us doing push-ups and pull-ups to get fired up, as documented in this picture. 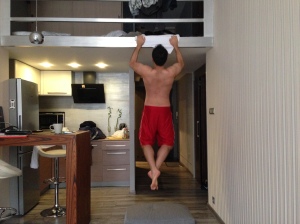 We headed out for the night, this time documenting where we were going by doing some prior research of the data sheets on the Roosh forum.  There was just one problem: we got lost.  Again.  On top of that, neither of us had bothered to bring our phones out for the evening, so we were basically stranded.  We found this cool alleyway with a ton of bars and clubs, but not a lot was going on at that time.  We headed back to the apartment to double check our instructions and realized…

We’d been in the correct place.

Okay, so our sense of direction was not exactly great on that day.  We headed back out to the club sufficiently buzzed at this point (pounded more shots when we went home), and had a great time dancing and running around some clubs.  This picture sums up the night:

Finally, after failing to hook anything effectively in the clubs, we headed home for the night.  And that was when we were stopped, on the street, by two stunning 18-year-olds, who told us we were, “Very handsome and put together.”  Google ‘Yadstop’ if you don’t know what it is.

If that doesn’t shock you, I don’t know what else will.  Would that shit ever happen in America?  No.  My mind still is shocked about the situation, especially since they then proceeded to walk with us straight into our apartment about three minutes later.  Jeremy’s tweet about it made me chuckle.

Lucky redeemed himself and managed to get the cute blonde into the bathroom while I chatted with the brunette.  I heard music blasting and what appeared to be stuff falling down.  I figured he was probably getting it in.  About ten minutes later he emerges, and the two girls proceed to leave.

Re-energized, we headed BACK out again for the third time that evening.  At this point it’s probably about 2:30am.  We head back to the same club and proceed to fuck around the rest of the night, finally making it home a few hours later.

I went to bed exhausted, but thrilled.  My first full day in Europe was nothing short of incredible.

Tomorrow is my final day in Wroclaw – the search for the ALPHA DWARF.

Where is ALPHA DWARF?